Chris Voss is a former hostage negotiator for the FBI. In a conversation with AppSumo, Voss reveals business negotiation tactics entrepreneurs can start using today to be stronger negotiators.

Chris Voss is the best-selling author of Never Split the Difference: Negotiating as if Your Life Depended on It. He’s also the CEO of The Black Swan Group, a company that helps people improve their personal and professional negotiation abilities.

Why does he know so much about negotiation?

Well, Voss is a former FBI hostage negotiator with decades of experience applying some of the tactics in this interview to literally save lives.

Voss learned the power of empathy early in his career. And he believes there’s a huge business case for mastering it: Empathy saves time. 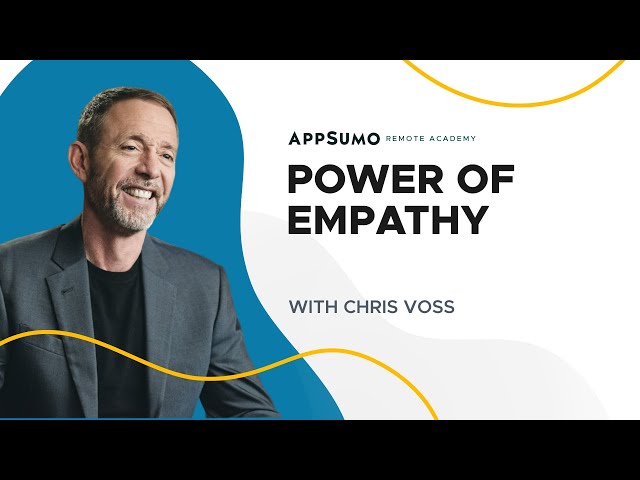 Empathy accelerates things and gets to the heart of the issue. Throughout the rest of this article, you’ll see examples of empathy being used to cut to the chase. It’s the fast-track to connection that zips past all the unnecessary back and forth.

Even though, according to Voss, EQ can be learned and applied to ever-growing degrees. Emotional intelligence is the superior skill in negotiation and “beats IQ every time.”

In the case of a debate or argument, simple emotional intelligence can turn hard questions back on the person who brought them up. Voss used the example of saying, “How am I supposed to do that?”

It’s effectively a way to say “no.” But the phrasing also pushes the problem back onto the person who posed it. Now, it’s a collaboration to solve the problem that was intended as an attack. 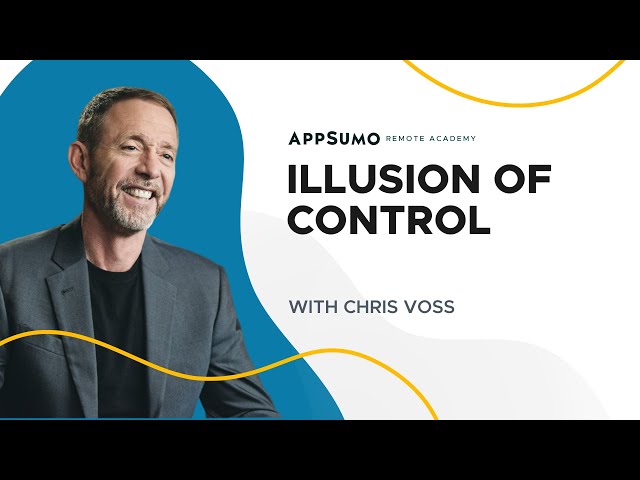 The secret to gaining the upper hand in a negotiation: give the other person a feeling of control.

Most people think of negotiations as arguments. When we imagine ourselves in a negotiation, the image in most of our heads is two people arguing and yelling over one another, each trying to beat the opponent.

In reality, Voss says there are three approaches to negotiation that each of us takes naturally. The three types are divided pretty evenly into thirds, no matter where you’re from.

It’s important to know the three types of negotiators. It’s similarly important to recognize what type of negotiator someone else is when you’re working with them. Each type responds to negotiation situations differently.

Take the aspect of silence during a negotiation as an example.

And that’s just one small component of a negotiation. Imagine how many other ways these negotiating personas apply to how you engage in everyday conversations.

Use labeling to diminish negative emotions

You can’t plant an idea in someone’s head and cause them to live it out (this isn’t Inception).

But the opposite is true. When you label an emotional dynamic, you draw it to the surface.

In your next brainstorm session, instead of saying “What are you thinking,” try saying, “It looks like you might have some ideas.”

These two instances are completely different for triggering brainstorming.

In the first situation, the person receiving the question will feel like they need to prove their smarts because of how the question was phrased. That, in turn, puts unnecessary pressure on that person’s answer.

In the second case, the person answering has simply been asked to share their ideas. There’s nothing to prove, so they can open up a flow of consciousness.

You can use a similar tactic to call out an elephant in the room.

Do an audit of what the other side might be thinking negatively. Call those out, and then sit and wait for the person to respond.

It might come in the form of: “Do you think this call will be a waste of your time?”

Many of us assume that by saying something so blunt, we’re giving the other person an idea that wasn’t there before.

Empathy is your superpower

If you can define in your mind that empathy is not equivalent to agreement, you can unlock a powerful skill. You can empathize with anybody. Empathy is unlimited if you uncouple it from agreement.

This is a tactic Chris Voss used in hostile negotiations: beginning conversations with clear empathy toward how the other person felt. The other party has to be heard and understood before they begin to collaborate with you.

“Fair” is the F-bomb of negotiation

Voss also pointed out that when people say, “That’s not fair,” it usually means they don’t have points to back up their side of the negotiation. If they had strong arguments, they would have used them instead of discussing fairness.

Saying something is unfair is evidence to the contrary.

Look closer. When someone uses fairness in a conversation, that’s a sign of vulnerability. You must be careful with that information. The person has let you know they feel weak and defenseless. That’s a sign that you need to move carefully through the negotiation, or it will blow up.

This is an opportunity to empathize with the person—a chance to go deeper with them.

When you see vulnerability, go deeper

Contrary to popular opinion, when someone is vulnerable during a negotiation, you should not double down to corner them – that’s how you drive them away from the negotiating table.

Even worse, you might get a “yes” but risk the other person causing a lot of trouble during implementation.

“Yes is nothing without a how.”

The late-night FM DJ voice is the calming, soothing voice of a hostage negotiator. It physically calms a person’s brain down. It’s a tone of voice that uses a downward inflection to show confidence.

It takes practice for this voice to feel natural, especially in chaotic situations. But by remaining calm, you will calm others down. That’s why hostage negotiations are calmer than business negotiations.

The funny thing is, using this voice calms the speaker down as well. The soothing nature of your own voice will hit your brain the same way it hits the listener.

How to practice the calming voice

Use this voice when speaking to Lyft drivers, waiters, or your mother on the phone. Find low-stakes conversations to test drive this voice to witness its impact.

In fact, Voss says COVID-19 is a good time to practice this because people are worried right now. Everyone could use a soothing voice. Next time you pick up the phone, use this tone as you speak to the person on the other line.

Go for no, not yes 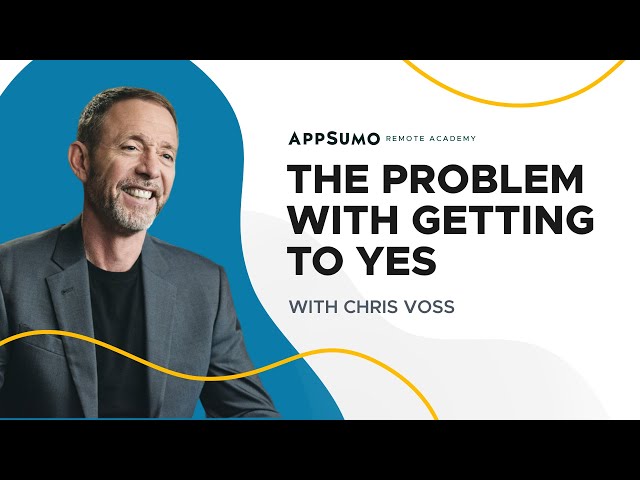 Voss says momentum selling is nonsense. In essence, momentum selling means that every time you get a person to say yes in a conversation, it makes the person more likely to give another yes to another question.

The rationale goes like this: when you back them into the corner, they have to say yes again to be more consistent.

Sure, maybe you’ll fall for that once or twice in your life, but you’ll quickly learn that people are just scamming you. Then, you’ll notice the red flag at the first question.

Instead, Voss says you should switch to no-oriented questions.

It feels weird the first time you use it in an email or a conversation, but Voss says it works and we’ve seen the results first-hand.

You don’t have to be in a high-stakes situation to learn excellent negotiation skills. Circling back, the key is empathy.

Here’s the tactic Voss recommends everyone should practice to become better at negotiation today:

Hear the other side out. 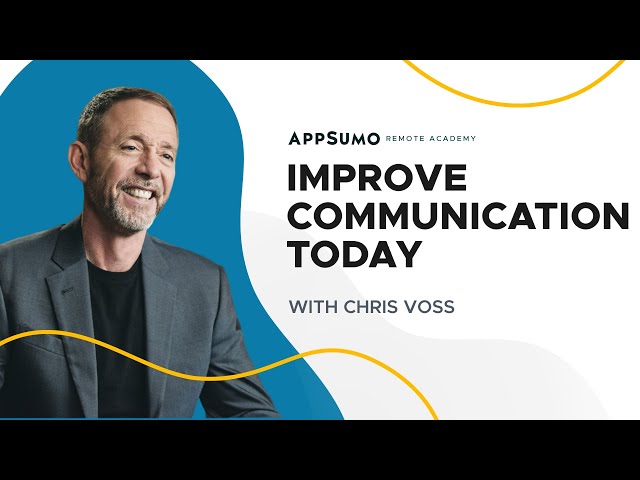 When someone says something, don’t just respond with another opinion.

Instead, summarize what they said. Label, summarize, repeat back what you heard. Try this first in your low-stakes conversations. Then, take it to harder conversations and see how it works out for you.

If you want to learn more about Chris Voss, his book, or negotiation tactics, you can find all his content here.

Want to make the most out of working from home? AppSumo is running a FREE live Remote Work Academy for the next few weeks! Register here.

Check out other posts from the Remote Work Academy: