Did your last giveaway totally suck?

You might have gone into it thinking it would be simple. You’re giving stuff away for free, so it shouldn’t really be that hard to get people to participate… right?

Well, so much work goes into planning and implementing a giveaway that if you don’t do it right, you could end up with a less-than-stellar turnout. Or maybe lots of people show up for the giveaway, but you don’t see any real benefits for your business afterward.

Let’s dive into what a great giveaway really is and take a look at 3 reasons why your last giveaway sucked. 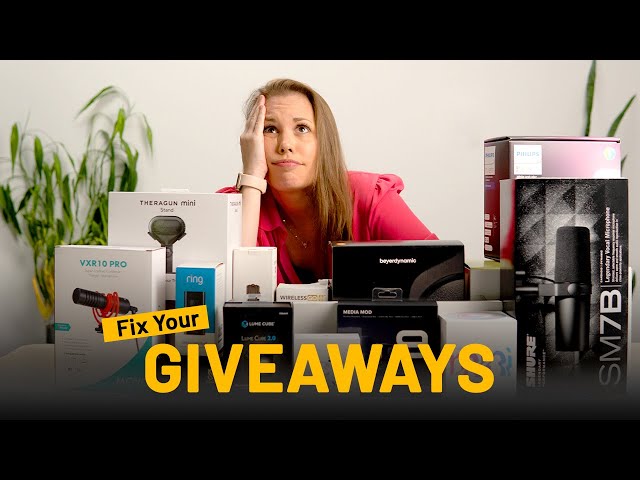 What a giveaway really is (and what it’s not)

If you want to host a killer giveaway, you’ve got to be clear on what a giveaway really is AND what it most certainly is NOT!

Let’s start with what a giveaway is NOT…

It’s NOT free stuff from your cousin Jeff

Nobody wants a t-shirt from Jeff’s “up-and-coming” streetwear line that’s still in the ideation phase. Nobody wants a used iPhone 3 that Jeff has had in his closet for the past decade. And nobody wants free tickets to Jeff’s one-man show that he’s advertising as “a cross between Fiddler on the Roof and CATS but in the 80s.”

If your giveaway prize isn’t good, then no one is going to care about your giveaway. PERIOD. The whole point is to give away something your audience actually wants. (And they want nothing to do with Jeff.)

It’s NOT a handout for anyone who messages you

We get it. Giveaways can be exciting! Especially when the comments and messages start pouring in from people who are also really excited about your giveaway.

But your giveaway has to give an equal chance to all participants, not just those who blow up your DMs. Otherwise, it isn’t fair, fun, or likely to bring you the results you’re looking for.

It’s NOT an excuse to blow the marketing budget

Would it be really cool to give away an all-inclusive trip to Italy for four people during the holidays? Sure.

Are you really going to put your entire marketing budget into one giveaway? No, you’re not. That’s not the point of a giveaway.

It’s definitely NOT a scam

A lot of people think that giveaways are scams. With so many actual scams out there, it’s no surprise that this pops into a person’s mind when they see a giveaway.

But a good giveaway is not a scam. It’s not marketed to seem like a scam. And people don’t think it’s a scam when it’s done right.

Now that we’ve got that out of the way, let’s talk about what a good giveaway is…

A giveaway is a legit competition that gives your subscribers and customers an equal chance to win some really dope stuff. (Just not dope stuff from Jeff. We already covered this.)

And the truth is, your brand benefits from doing giveaways, too. Giveaways are a great way to:

Now that we’re all on the same page about what a giveaway is and what it is not, let’s dive into why your last giveaway sucked and how you can fix it next time.

3 Reasons Why Your Last Giveaway Sucked

Are you ready to start planning your next kick ass giveaway? Let’s cover the top 3 mistakes we see people make when running giveaways.

1. You’re not setting a measurable goal

The first thing people do wrong when planning a giveaway is not setting a measurable goal. If you don’t know what you’re trying to achieve with your giveaway, you won’t know if it was successful. Before you do anything, you need to set a clear and specific goal that outlines how you will measure results.

For example, for our Tesla giveaway, our goal was to get a bunch of new leads. With a name like Tesla attached, we wanted to go as wide as possible and get half a million entries.

We absolutely smashed our expectations with close to a million entries and over 70% of our contestants were new leads! In case you’re wondering…. That’s PRETTY DAMN GOOD.

So do yourself a favor, before you host your next giveaway. Write down your giveaway’s goal and stick that at the top of your brainstorm list, whiteboard, Post-It pile—whatever you use to brain dump. That goal is your north star.

2. You’re not setting a budget or choosing a prize wisely

The next most important thing that people mess up is that they don’t set a budget or choose their prize wisely enough.

The two biggest things you wanna keep in mind while setting a budget and choosing a prize are distribution and hype.

You want to choose a prize from a company that’s in your industry or compliments whatever service or product you sell. And that company should have a HUGE following and a HUGE number of subscribers on their email list. That way, you get free advertising and a far wider reach for your giveaway.

Your budget can obviously be whatever you want, but just don’t blow it all on the giveaway prize itself. Why? You’re going to need some of that budget for actually marketing your badass giveaway.

And that’s where the hype comes in…

You can totally choose a generic prize if you want, but then you gotta bring out the big dogs for the hype machine and spread the word in other ways. For example, if you want to just give away company swag or generic but popular products like Beats headphones—make sure you will have a TON of potential winners. That way, you’ll make sure there’s going to be a TON of word-of-mouth advertising flying around the Internet for your giveaway since so many people have the potential to win a great prize.

And if you’re choosing a generic prize, you should also leave some room in the giveaway budget to pay for ads in large, far-reaching publications. (That’s the secret sauce they don’t tell you about in your marketing classes!)

3. You’re not thinking about what happens after the giveaway

Here’s the last thing that you’re doing wrong. It’s the part that everybody screws up…

You’re NOT thinking about the post-giveaway.

Most people think that when the giveaway is over, you’re done with the giveaway. But trust us. The fun is not over yet. What happens after the giveaway is just as important as the giveaway itself. You’ve got to have a strong post-giveaway game if you want to reap all the benefits!

Once you have chosen the winners for your giveaway, you will have some really happy people who just won some really awesome prizes. They’re now tried and true fans of your company who are absolutely stoked that they just won and will be super excited to be the face of the campaign.

When you highlight giveaway winners in your post-giveaway marketing, you’re tapping into AUTHENTIC marketing that you just can’t get anywhere else. Not only will this allow you to really celebrate the giveaway that just ended, but it’ll also be great to use as a promotion for your next giveaway.

If you’re not using that authentic marketing or showing people that you’re having fun with your giveaway, it’s gonna suck. So do yourself a favor and create a giveaway hashtag that people can use to share their excitement about winning a prize. Then, utilize that user-generated content in your marketing.

You can simply post the images and videos to your social networks or shoot your own video—like we did with THIS guy that won the Tesla. Look at how happy this guy is. Try and tell us that you don’t want to join our next giveaway. Go ahead. Try!

Wanna know the secret sauce behind AppSumo’s giveaways? The one thing that helps us bring all the giveaway contestants to the digital yard? (We can teach you, and we don’t have to charge.)

We use KingSumo to help our giveaways go viral… ALL THE TIME. KingSumo gives us the ability to do things like give contestants bonus entries on autopilot for certain actions they take. We can reward contestants with bonus entries for following us on social media, watching our videos, or visiting our website.

Perhaps one of the greatest benefits of this feature is that we’re able to reward contestants for spreading the word about our giveaways on Twitter, Facebook, Messenger, and email. That way, our audience can help us get more eyes on the giveaway—which makes it more real and fun for everybody. (Not to mention, it helps with virality!)