Some of the most successful, recession-proof businesses in history started in a slow economy. Amidst the coronavirus pandemic, they could be a guideline for your company.

A shaky economy is a scary scenario for any entrepreneur. But history demonstrates time and again that many highly successful, seemingly recession-proof businesses have their roots in slow economies. Whether it’s centurian companies like General Electric (1890) or IBM (1896) or stock market powerhouses like Disney (1923) or Microsoft (1975), responses to an economic downturn can teach us a great deal about starting and running a business.

On the surface, it seems counterintuitive that any business would succeed in a slow economy. However, a study released by the Kaufman Foundation in 2009 found that over 50% of Fortune 500 companies started either in a bear market or full blown recession. Are there common themes we can all analyze to help navigate the current economic slowdown and come out on top with a recession-proof business? Let’s find out! 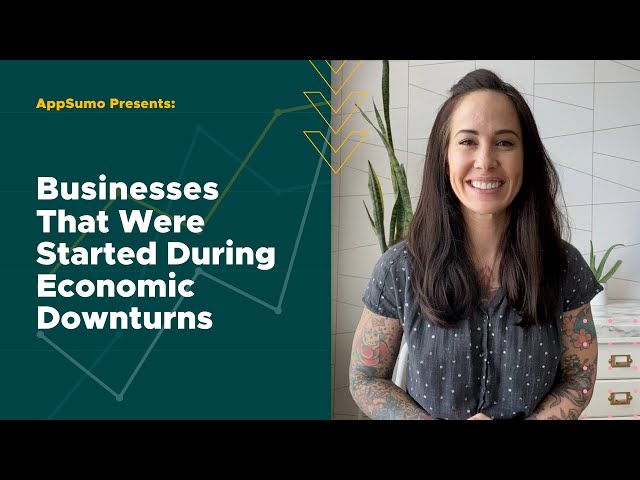 A sustained economic downturn is difficult for everyone, full stop. It makes sense that a slow economy would suppress entrepreneurship as the masses turn to stable jobs at larger firms and available credit is scarce. Plus, it’s just hard to get customers to spend money when they’re worried about their bank accounts.

That said, bear markets offer a unique opportunity to founders: a chance to spot gaps in the market when firms begin cutting their budgets.

The Story of Zendesk During the 2008 recession, the founders of Zendesk saw that existing IT and ticket software systems were needlessly complex, hard to set up, and incredibly expensive. With the rise in cloud computing and self-service online sales models, the three founders set up a simplified, cloud-based ticketing platform that was free to try and cheap to buy.

While Zendesk initially lacked the bells and whistles of legacy systems, its founders successfully spotted a seismic shift in how companies deployed help desk systems (from on-premise to the cloud). They were quick enough to take advantage. Feature parity quickly followed, and today the legacy players are history. Zendesk now employs 3000+ employees across the globe.

Some of Zendesk’s earliest customers were similar “Web 2.0” companies like Twitter, Eventbrite, Scribd, and Rackspace. These companies were all founded around the same time period. Like Zendesk, all of them brought new and innovative business models to their respective verticals. A rising tide raised all boats as these firms gained major traction against legacy incumbents. By partnering with similarly nimble and modern companies, Zendesk enjoyed an extra boost as its customers conquered their respective domains.

The Upside of Unemployment

There’s no way around the fact that employees are more likely to lose their jobs when the economy slows down. It can be painful and distressing, especially when an individual’s performance is good, but the firm’s performance is not. But could there be a hidden benefit in rising unemployment?

The first hidden benefit is that highly skilled workers at large companies (maybe that’s you!) are now freed up and have little to lose. Perhaps the most famous fired employee of all time is Steve Jobs. As founder and CEO of Apple, he was unceremoniously ousted by the board in 1985 after a power struggle. Rather than join a competitor like IBM, Jobs spotted a growing demand for powerful computers for business markets and higher education. So, he founded NeXT to meet the need. In addition, he followed his passion for the arts by advising and funding the computer graphics division of Lucasfilm Ltd.

Spoiler alert: this worked out pretty well. Twelve years after he was fired, Apple acquired NeXT for $429 million dollars. Less, than a year later Jobs returned to the job of CEO. Over the next 15 years, Jobs presided over perhaps the most successful string of product releases in business history, culminating in the iPhone in 2007. His side project with Lucasfilm? It became Pixar.

What’s the lesson to be learned here? Highly skilled and highly motivated individuals can outpace and outsmart the employer that let them go.

The second benefit to rising unemployment is that founders have a wider selection of talented potential employees to choose from. AppSumo’s own founder, Noah Kagan, uses this tactic by identifying companies he thinks are excelling and turning to LinkedIn to find who’s behind the scenes. Are there companies you’ve admired from afar? Could you use some of their magic for your own company? Bringing that talent to your own company might be as simple as shooting a friendly outreach email!

Does the business model matter?

There are two schools of thought when it comes to starting a business in a slow economy. One strategy is to lean into categories that typically do well even when the economy is sluggish. Food and beverage is a classic recession proof category – everyone needs to eat regardless of the stock market’s performance. During a recession in 1953, Keith Kramer and Matthew Burns took advantage of America’s love for a tasty burger and new technology (the “insta-broiler”) that enabled them to cook meat faster and cheaper than their competitors. Their new restaurant Burger King went on to become one of the most popular fast food chains around the globe, employing more than 35,000 people in 17,000+ locations.

Alternatively, a slow economy can be an opportunity to look on the horizon and spot coming trends. The mid-70s were a particularly slow time for the US economy. Oil prices were skyrocketing, inflation was out of control, and unemployment was rising. Few would think this would be the perfect moment to begin selling operating system software to the newly born personal computer market. Yet, in 1975, Bill Gates and Paul Allen founded Microsoft to pursue this new market. Having had the foresight to see the power and capability of computers while at Harvard, Gates took a major gamble. His confidence paid off. Today, Microsoft is a 125 billion dollar company. Be Greedy When Others Are Fearful

Warren Buffet famously said “Be fearful when others are greedy and be greedy when others are fearful.” For better or worse, there will be a lot of fear and hand wringing over the coming weeks and months. You may read grim news on a daily basis and feel like there isn’t much reason to stay engaged.

Stay strong! The United States has been through an estimated 44 recessions since the 1850 and emerged more prosperous and innovative each time. As we’ve covered, some of the most successful businesses in history have their roots in a slow economy. Embrace the chaos and plan your prosperity through this bear market.

Resources to Help You Start Your Business

Whether you’re ready to start your business or looking to cut bills without cutting your capabilities, AppSumo offers lifetime deals on top tier software. We also offer courses and free e-books to help you with your business. Here are a few that we recommend: